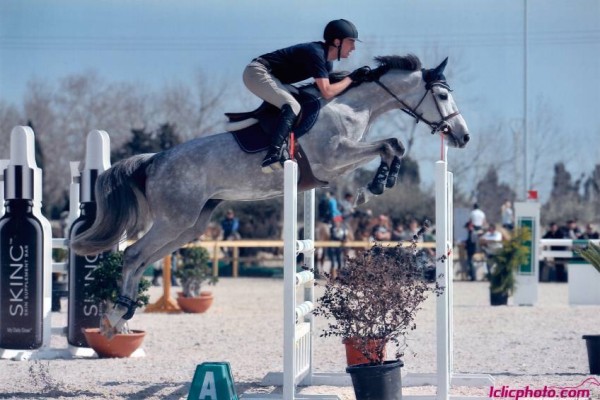 "Beatrice" was bred in Amsterdam, The Netherlands, by A. den Hartog. She came in the end of 2011 to SHALANNO FARMS as a 5 year old horse. She is a beautiful grey mare with a fantastic breeding. As an offspring from Berlin x Lux x Lucky Boy there is no doubt about her jumping qualities. In 2009 she earned 85 points at the IBOP in Brummen with a 9,5 for jumping. The commission stated she has a strong canter and fast reflexes. Her way of jumping is ‘out of the book’ and she is showing lots of use from the front leg and body. Besides her good technique she is easy to ride and has a great character.

Father Berlin is well known with Wim and Gerco Schroder. The stallion grew in the sport and after winning multiple international classes he was approved in 2003 at the KWPN. Highlights were winning the world championships in Aachen in 2006 and the European Championships in 2007. In 2009 he retired from the sport and is full available for breeding.

SHALANNO FARMS decided in 2013 to start breeding with "Beatrice" and June 15, 2014 a foal from Kannan was born, “Jay Bloobiday”. Beatrice’s first foal with SHALANNO FARMS was with praise winning the ‘Paardenfokdag Veluwe & Vallei’ in Terschuur, a foal competition. The judges saw a young foal, only 6 weeks old, but they said he has an extreme good canter and ‘sports model’. “Jay Bloobiday" has a very good balance and changes and is very flexible”.