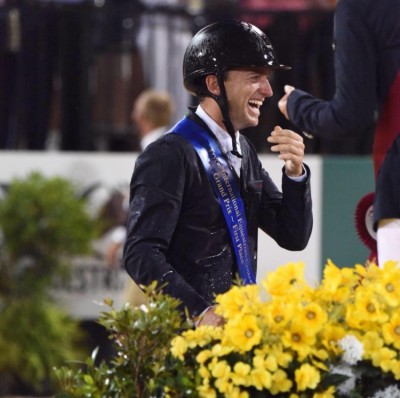 Andrew was born in the San Francisco Bay Area the summer of 1985. At the age of 6, he announced that he wanted to ride horses and he started with Paul Bennett, then Assistant Trainer to Gry and Duncan McFarlane of Windfall Farm in Danville, California. As Andrew’s commitment to the horses grew, his family supported his talent as long as he maintained his academic standing in school.  As part of this partnership, the family established SHALANNO FARMS LLC, a private training stable operating out of a leased facility in Pleasanton, California. With the help and training of Linda Hough, Stephanie Simmonds and John Wohr, Andrew had a very successful junior career consistently qualifying for the national finals in the three divisions of equitation, hunters and jumpers. Jumper highlights included earning the individual gold and the team silver in the Junior division of the North American Young Rider Championships in 2001 followed by the individual silver and team silver in the Championship division in 2002.  With the young  hunter Step by Step, he earned the Grand Hunter Championship at Harrisburg  in 2000.  At the age of 17, he earned his gold medal (20 wins) in the Rolex/USET Show Jumping Talent Search.

After graduating from high school, Andrew withdrew from the horse world for 5 years including a gap year and 4 years at Colby College in Waterville, Maine.  During those years, he maintained no horses in training only catch riding infrequently. Rather,  he dedicated himself to being a full-time student while still juggling competitive mountain biking, long distance riflery, and downhill skiing.  While his skills in computer science earned him a research grant in robotics culminating in co-authoring a paper and presenting in Seoul, Korea, his attachment to the horse world won him back. He graduated from Colby in 2009 and regained his riding fitness and eye by working for Stephanie Simmonds, his previous private trainer then running her own training stable. In 2010 he hired out to Lauren Hough for the Winter Wellington Circuit after which he set off to Europe to be a working student in Alan Waldman’s stable in Putten, The Netherlands. His intention had been to stay for 3 months only but he renewed for another term. With support and encouragement from Alan, early in 2011 he opened up his own business reclaiming the name of SHALANNO FARMS. By the summer of 2013, Andrew had completed the construction of his own 8 horse stable next to his previous employer and mentor, now friend and business colleague.

Since 2012, Andrew has been traveling between Europe and America to advance his professional show jumping career while continuing the business of developing young horses.

For the future, Andrew sees himself competing the summer season in Europe and the winter circuit in Wellington. His ambition remains the same - to earn the right to represent America in National teams on the Championship level.  As he says, “I am American, after all!”