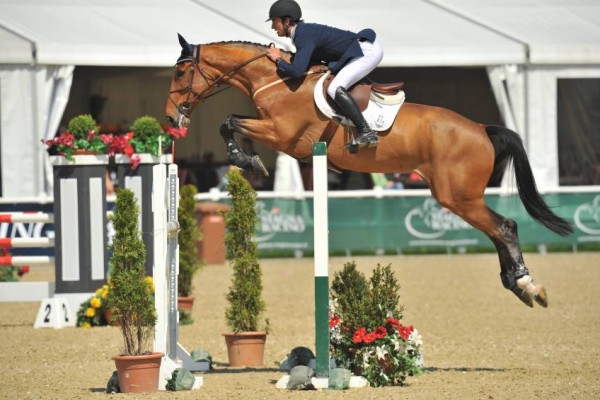 "Felicity van den Bisschop" came to SHALANNO FARMS as a young horse in 2011. She has a very interesting breeding with Calato as her father and Aphrodite D'arsouille as her mother. Aphrodite D'arsouille is the full sister of 2010 World Champion Vigo D'arsouille with Philippe Lejeune. Calato performed in the international showjumping sport under Danish rider Jennifer Fogh Petersen and became winner of the Danish championship for young riders. Even though Calato himself did not perform at the highest level of showjumping, his offspring certainly did.Tthe most famous ones are Coster (European Champion with Christian Ahlmann), Corinessa (Hubert Bourdy) and Callistro (Janne-Fredrike Meyer).

Andrew jumped "Felicity van den Bisschop" succesfully in the finals of the World Championships in Lanaken en after she was sold to Italy where she is still ridden by Marta Botanelli.