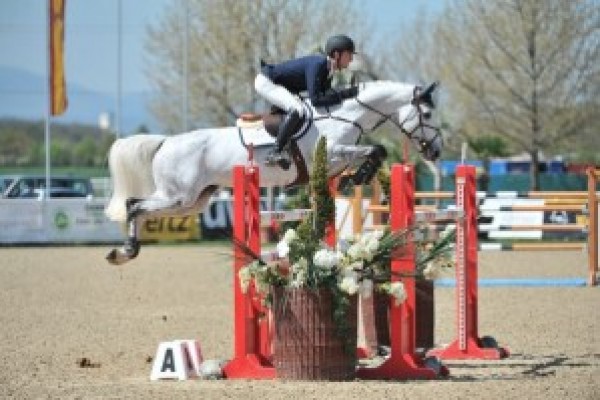 "Absie" (Corland x Heartbreaker, 2000) was bred in Belgium by Fam. Nijs. With a bloodline like Absie's it is not hard to believe she made it to the top level in Showjumping. Father Corland, approved in no less then 11 studbooks, jumped at 1.60 level, mother Urmina jumped at 1.60 level and grandfather Heartbreaker jumped at 1.60 level.
As a young horse she was sold to the American rider Sarah Ballou who continued her development to Grand Prix level. In 2012 "Absie" came to SHALANNO FARMS and jumped up to international 5* level with Andrew.
In 2016 it was time for "Absie" to retire from the sport and become a valuable breeding mare. She moved back to the stables in The Netherlands and SHALANNO FARMS hopes to get some nice offspring from her.

"Absie" had many good results in 2014 including winning the Grand Prix of Drachten, a 5th place in the $100,000 Del Mar National Grand Prix, a 6th place in the Bantral Cup in Calgary and a 7th place in the Nexen Cup Derby in Calgary. "Absie" was leased out in August 2014 to Frances and Taylor Land where she had immediate success winning the $25,000 Jr./ AO Classic at Gold Cup on Old Salem, New York. In the end of 2015 "Absie" came back to Shalanno Farms.

“Absie” has four descendants, two daughters and two sons. Two of them are competing in international sport.

“Missy Blue de Nyze” (Mr Blue, b. 2008) is still in ownership of the original breeder of Absie.