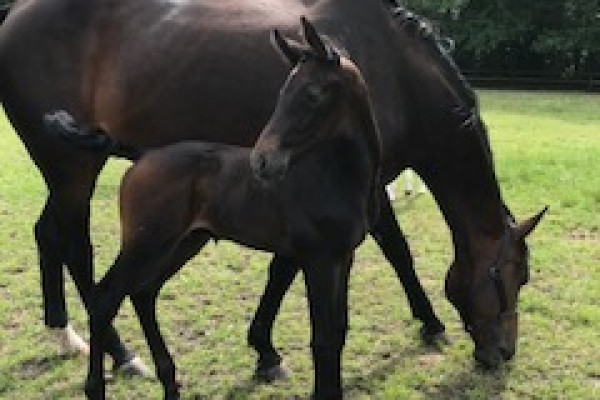 Due to embryo transplantation SHALANNO FARMS was lucky to have 2 foals from "Julia des Brumes" in 2017. Full brother of "Moneypenny" is "MacGyver". "MacGyver" was born June 24, 2017 and has the looks from a champion already. He is one of the most beautiful foals born at SHALANNO FARMS and has the same friendly character as his sister. "MacGyver" was born as a dark bay stallion but he showed grey hairs early on. He will be grey as his father and grandfather and SHALANNO FARMS obviously hopes for the same jumping ability as them. Golden Dream shows a promising future as a jumping horse and grandfather Zirocco Blue already proved himself at the highest level. Zirocco Blue was a member of the winnning Dutch team at the European Championships in 2015 and earned individually a 5th place with rider Jur Vrieling.