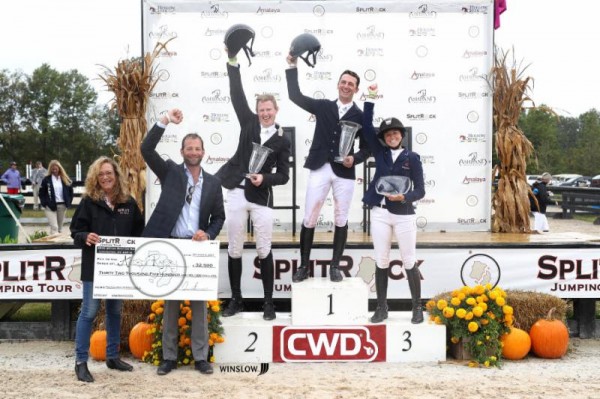 Of the original field of 39 starters, nine returned to contest Olaf Petersen’s shortened course. Ramsay and Cocq A Doodle, a 10-year-old KWPN mare by Tolan R, entered the ring in the eighth slot, having the advantage of seeing all but one test the course.

Ramsay geared up the little mare and 40.57 seconds later they crossed through the timers, two full seconds ahead of the field. The time would hold up to win the class.

“It was a wonderful show,” said Ramsay. “I brought one horse and she jumped fantastic all week. I have had Cocq A Doodle about two years in my stable and she is just a fantastic mare, really a winner. She just really wants to go and this jump-off suited her well. She can really gallop, collect, and turn and it all worked today.”

Ramsay made a rollback turn to a vertical in the jump-off that had the crowd gasping, but as Ramsay explained, “The left turns are a little more difficult for us, so I didn’t want to cut it too short. I got a little deep in the turn but I knew she had her eye on it, I knew she was there. She is so game. She just wants to please. Once you get her going she just looks for the fences. I really look forward to having more time with her.”

Second place went to Andrew Bourns, who rides for Ireland, with his CHS Inception, a 9-year-old Irish Sport Horse gelding by Clover Flush. The pair turned in two impeccable rounds, but their time of 42.76 second could not withstand the speedy round Ramsay turned in.

Ali Wolff, who hails from Columbus, Ohio, was the first rider to qualify for the jump-off with Casall, a 12-year-old Holsteiner gelding, owned by Blacklick Bend Farm, and they were the first pair to enter the ring to contest the jump-off. The pair turned in a clear round with a time of 43.15 seconds, giving Wolff a third place finish.